Just take a left upon exiting The Sherry-Netherland and head straight for the bright lights of Broadway. That journey to reach the footlights of a Broadway stage has inspired supremely talented performers for generations...but it will take you only 15 or 20 minutes to arrive at your seat.
The world’s largest collection of top theaters is quintessential New York City, right in The Sherry-Netherland’s own back yard. 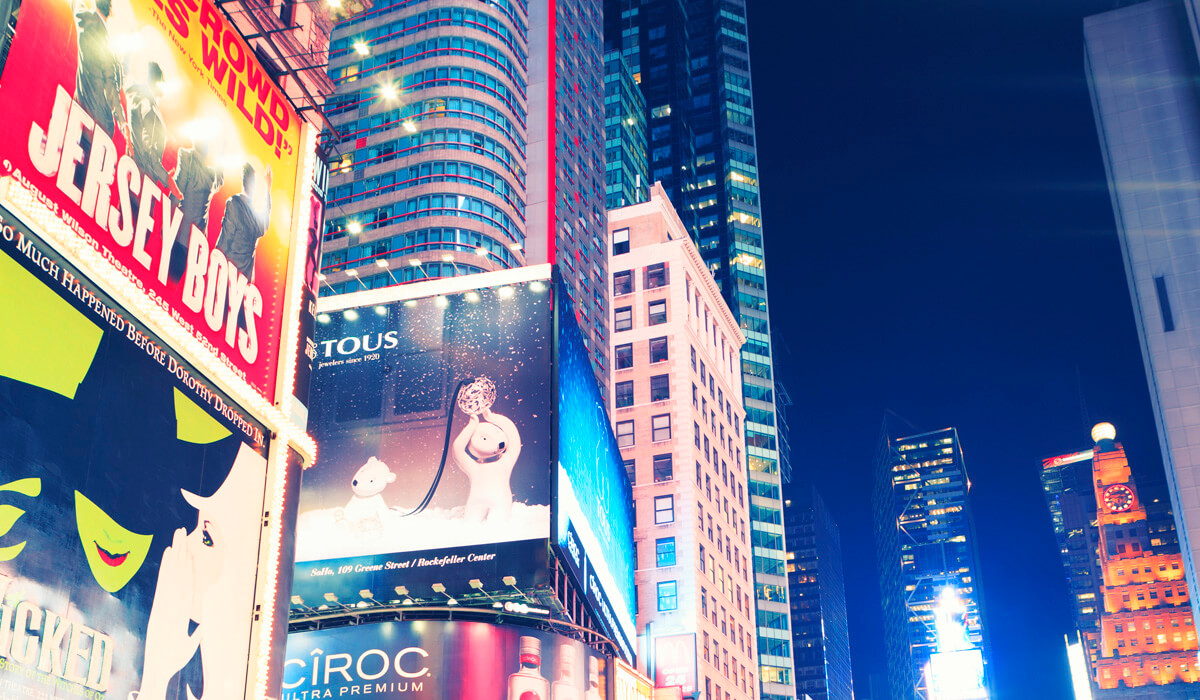 Dubbed “The Great White Way,” pulsating billboards, zipper news crawls, and neon marquees atop 40 theater entrances illuminate these few square blocks so brilliantly that nighttime appears as day. Follow the energy radiating from Midtown Manhattan’s theater district, stretching from West 41 Street to West 54th Street between Sixth and Eighth Avenues, including Times Square, known as the "Crossroads of the World."

For many of the world's finest actors, New York City’s Broadway Theater District is the hub of the universe. For audiences, approval comes to the tune of $1.45 billion spent annually on Broadway tickets by nearly 13.3 million theater-goers. As actors and New Yorkers have been saying for decades, there’s no place like Broadway.

Broadway returns to New York City every fall with fan-favorites and the premiere of new shows. The runaway smash hit that is still Broadway’s hottest ticket, the hip-hop “Hamilton” has been deemed nothing less than a cultural phenomenon. And leading in longevity is “Phantom of the Opera,” which celebrated its 34th birthday on Broadway in 2022.

In a town where the singing and dancing can’t be beaten, “Chicago” and “The Lion King” take up second and third places on the longest-run hits leaderboard...and are still going strong.

Several large musical productions, both original and revivals, join the current popular lineup that includes “The Phantom of the Opera,” “Wicked,” “Aladdin,” “The Book of Mormon,” and “Chicago.”

For the best advice on buying tickets, contact The Sherry Netherland's concierge team. Our knowledgeable staff can assist in finding the perfect show and tickets for your evening. Or, follow the recommended ABC’s of the Broadway League: A) Use the show’s official App or website; B) Visit the theater box office in person; C) Call Broadway’s official ticketing services, Telecharge at 800-432-7250 or Ticketmaster at 877-250-2929.

To encourage early appreciation of live theater, watch for Kids’ Night on Broadway® in late February, a special occasion when young people age 18 and under can see a participating Broadway show for free when accompanied by a full-paying adult. And to spread the love in wintertime, NYC Broadway Week offers 2-for-1 tickets for three weeks beginning in mid-January. Feeling lucky? Try the TKTS Discount Booth at Times Square for same-day theater tickets.